I am not the first foreigner to hike the Liechtenstein Trail: quite. That honour went to an American (as so many do). I am, however, the second. I know this because without the prototype of the LIstory App, the colourful augmented reality trail guide which the creators of Liechtenstein’s new national trail are also developing for the path’s official opening on May 26th 2019, finding the way at all would be impossible. And no other foreigners have been given the prototype of the LIstory App.

Do not worry: by the time you, dear hiker, read these words, the Liechtenstein Trail will be obvious both in reality (with clear red-and-blue way-markers and some of the most consistently well-maintained paths of any national trail anywhere) and augmented reality (the LIstory App is one of the boldest and most flamboyant hiking Apps in existence, with historic reconstructions of, behind-the-scenes peeps into and harrowing first-person accounts about key sights on the route). It is shaping up to be one of the best-presented new walking routes in Central Europe. I can testify to that. 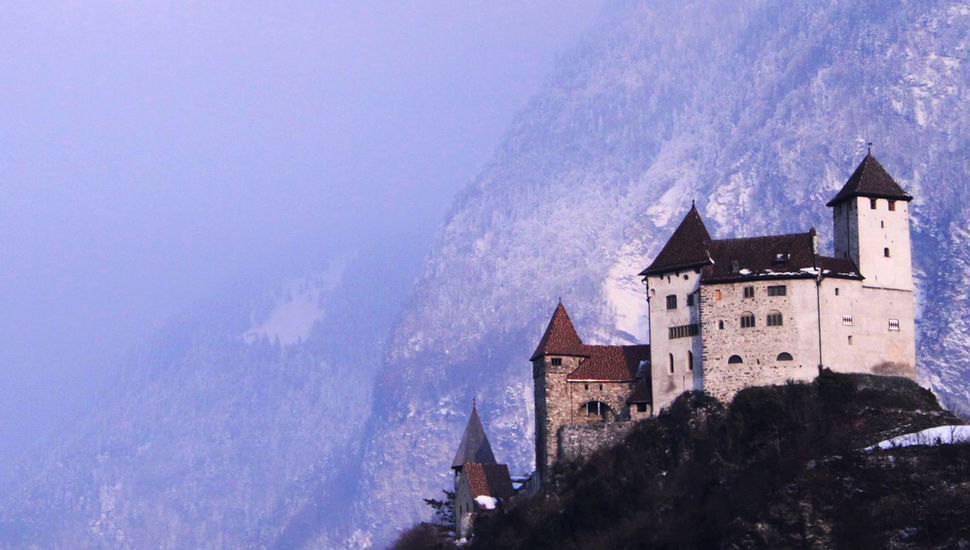 «Unlike most new trails, which visit all the big sights they can conceivably twist past, the Liechtenstein Trail impresses you by taking you to the little things.»

To be given the chance to be among the first to walk such a historic trail is always a pleasure. There is that sense of being the latter-day explorer; of seeing something few have seen before. The Liechtenstein Trail, however, is for several reasons in a category of its own. Of course, to celebrate a nation’s tercentenary - yes, Liechtenstein turned 300 years old in 2019 - by designing a walk traversing each of its municipalities is a cool concept anyway: if you hike the entirety of this path you will be passing either directly or in sight of almost every point of significance in the country in a long weekend (even in the mountain resort Malbun is an additonal 7km walk). What other trail in the world can claim that? And unlike most new trails, which visit all the big sights they can conceivably twist past, the Liechtenstein Trail impresses you by taking you to the little things. So rather than sticking high up in the mountains for which Liechtenstein is justly famous, this path takes you everywhere: the snow-capped peaks are there, but so are the lonely forests, the Alpine meadows, the Rhine valley, the villages and towns. It is a path that seeks to subvert expectations rather than conform to clichés. Many of the places it goes even Liechtensteiners do not know about. 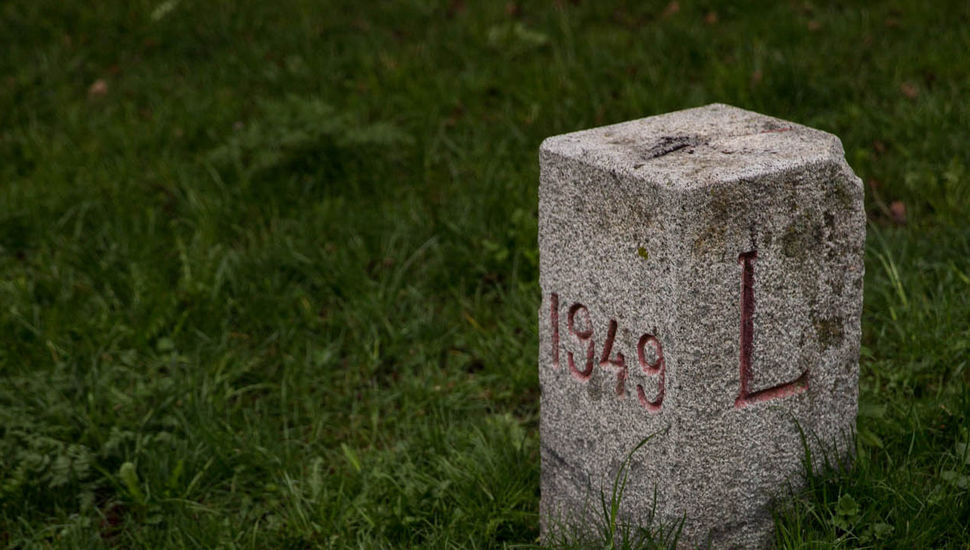 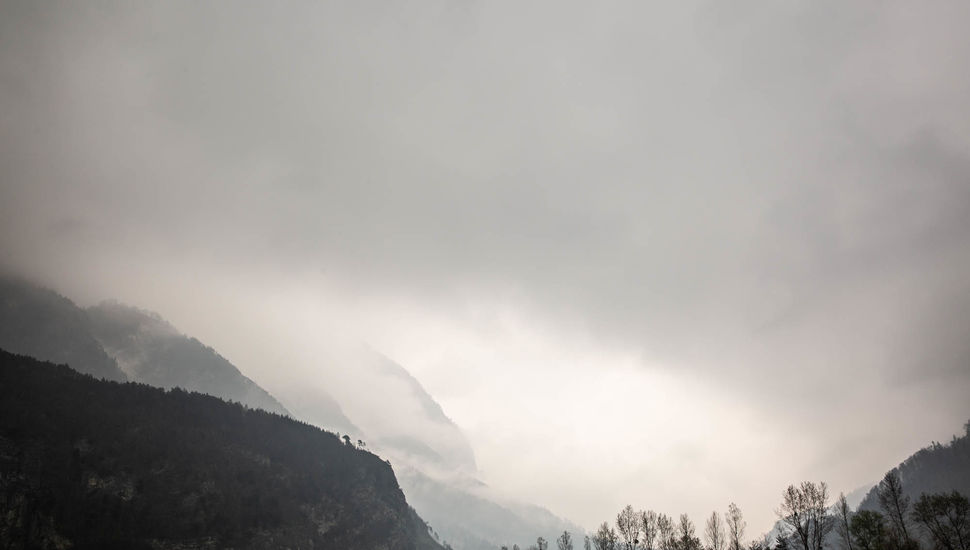 So there I am, a trailblazer in every sense of the word, on a pancake-flat green field in St. Katherina Brunnen in Balzers at the start of the Liechtenstein Trail on a misty April morning. A dunst (fog) has rolled in to obscure the dramatic set-piece mountains that can normally be seen soaring up from the valley here, but no matter, because my focus to begin with is on Liechtenstein’s lower reaches: the places that normally get very little attention, but deserve plenty.

The path starts on Liechtenstein’s southern border with Switzerland, just south of the pretty village of Balzers. The western border of Liechtenstein (the mighty river Rhine) and the eastern border (the Rätikon mountains) are conspicuous enough, but here it is less so. Sporadic border stones do mark the frontier, although this was not sufficient to avoid an accidental invasion by Swiss troops on a military exercise in 2007. The Swiss advanced almost 2km into Liechtenstein before realising their error, retreating and apologising! The route curves along the edge of a wood into Balzers, where the well-kept houses seemingly out-trump each other with increasingly extravagant displays of bucolic charm in their gardens: here ceramic hens, there cast iron silhouettes of countryside animals, over there a greater variety of gnomes than I ever thought existed. 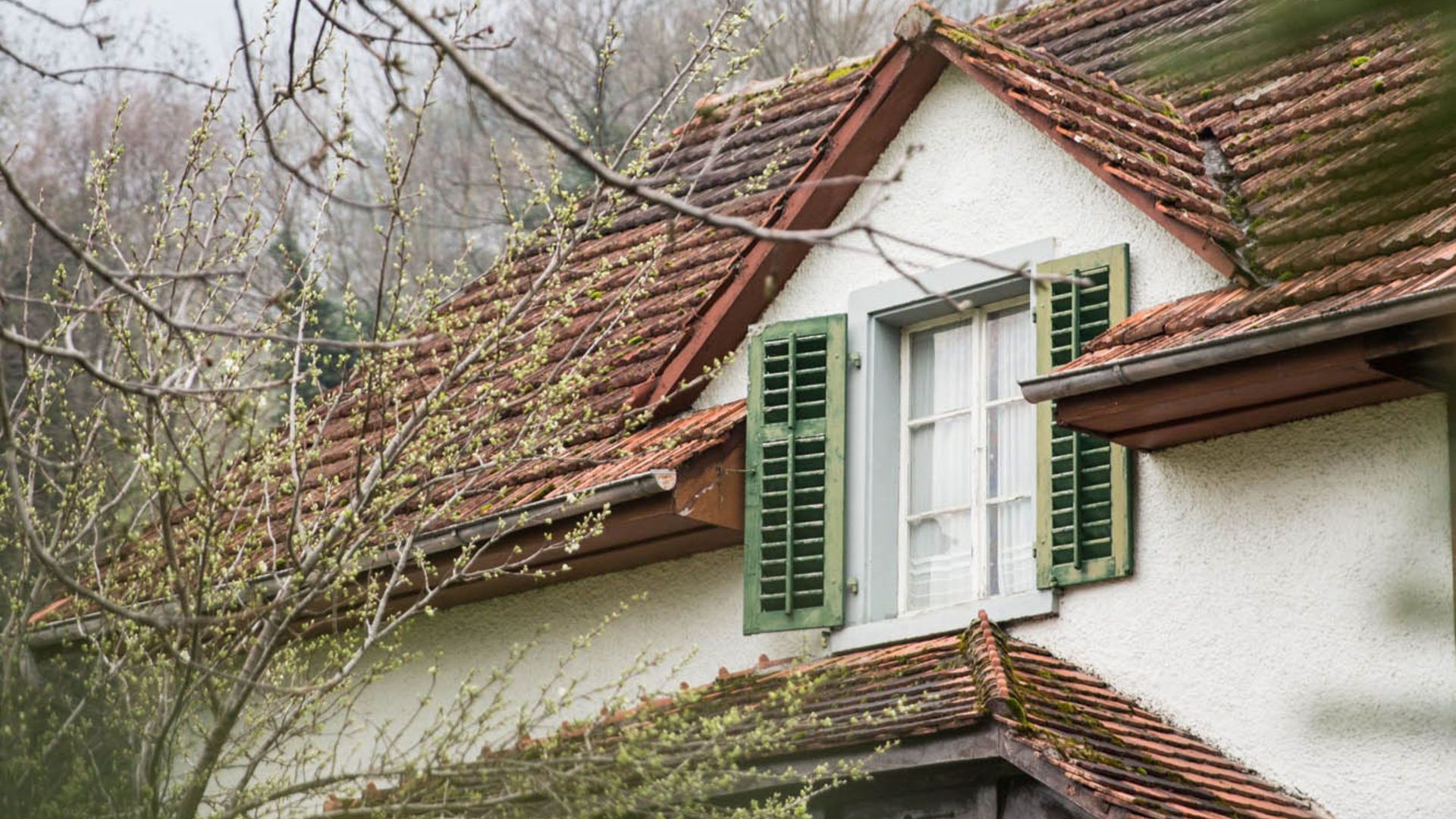 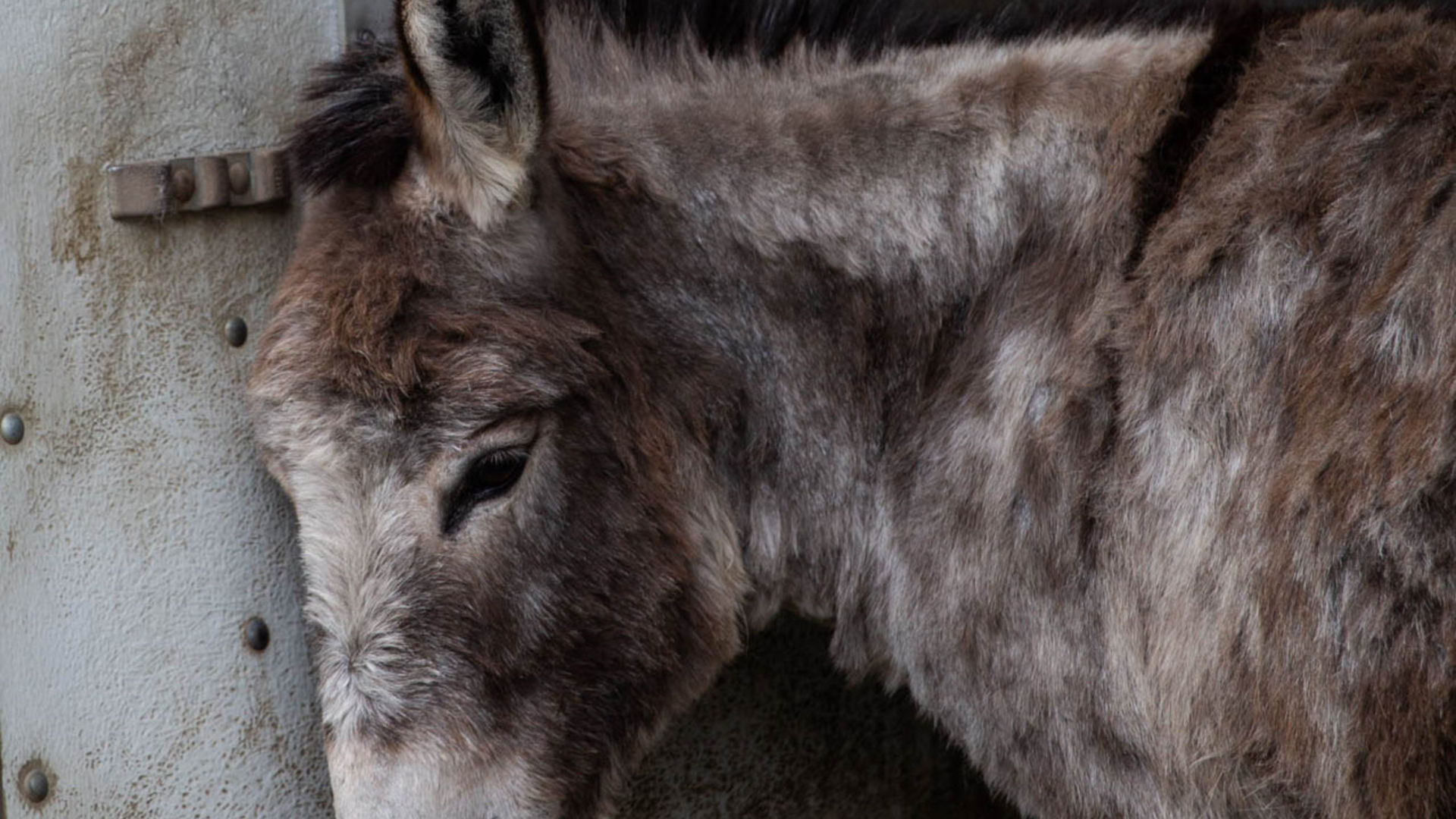 Central Balzers very much personifies the rural idyll: where most large villages have been over-run by car parks and thoughtless municipal planning, here the spaces are filled with delightful vineyards and pastures. The highlight is the fortress, terracotta-turreted Gutenberg Castle, which crests a vineyard-cloaked hill in the centre. Dating from the early 12th century it is thought to have been the one-time residence of Minnesinger Heinrich von Frauenberg, an important troubadour that contributed several songs to the Codex Manesse, the most comprehensive body of medieval High German courtly love poetry. In Balzers too I am introduced to what would become a recurring (and much welcomed) theme on the walk: lovingly restored ornamental drinking fountains! Nothing brightens the mood of a long-distance hiker more than a regular source of free, clean water, and so I leave Balzers in high spirits. 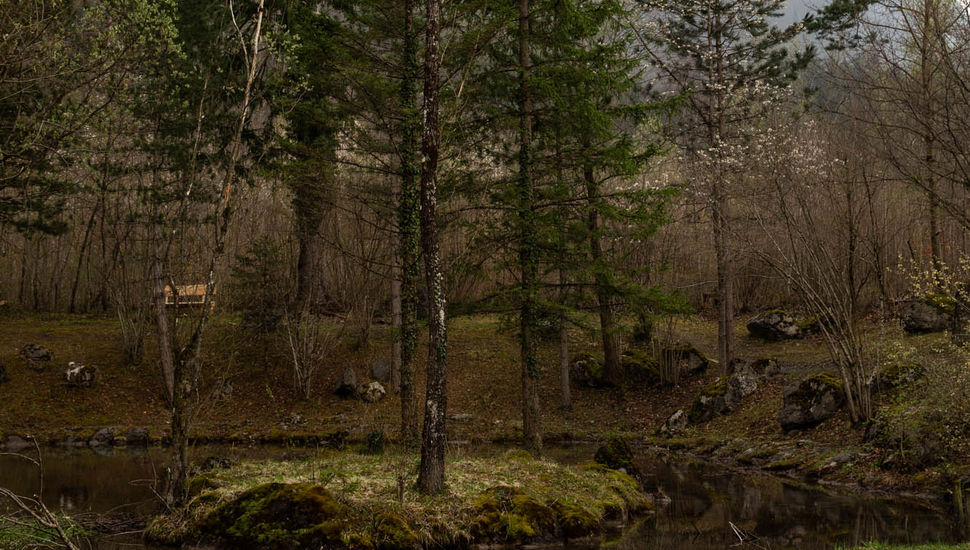 The path then diverts away from the main road into meadows and forested Alpine foothills. Balzers, the fourth-biggest settlement in Liechtenstein, is but a large village, so by comparison the next place of note, Säga/Triesen, is a hamlet half-hidden in trees. Here the serendipitous Lawena Museum charts the history of electricity: water-generated power, prevalent here because of the proximity of mountains and the Rhine, meant the country played an important role in the Industrial Revolution, and laid the foundations for Liechtenstein’s glut of famous businesses today. There is also a lovely campsite here, Camping Mittagspritze AG. It is a serene amble up through the woods and meadows to Triesen, a beguiling small town scattered down a steep hillside. Triesen contains the most important surviving remnant of Liechtenstein’s afore-mentioned Industrial Revolution legacy: the bombastic 1863-built weaving mill known as Jenny, Spörry & Cie. I am glad to take a break from the trail with a stop at Italian restaurant Osteria Adler. If I had wondered where everyone was in Triesen, I needn’t have done: they were all packed into this inviting little joint for lunch! Looking up at the route ahead with a bellyful of quattro stagioni, I see what seemed like snow blanketing a ridge high above. A closer examination reveals that the snow is actually the white-walled houses of Triesenberg glimmering 450 metres up, dizzyingly perched across sharply sloping foothills. 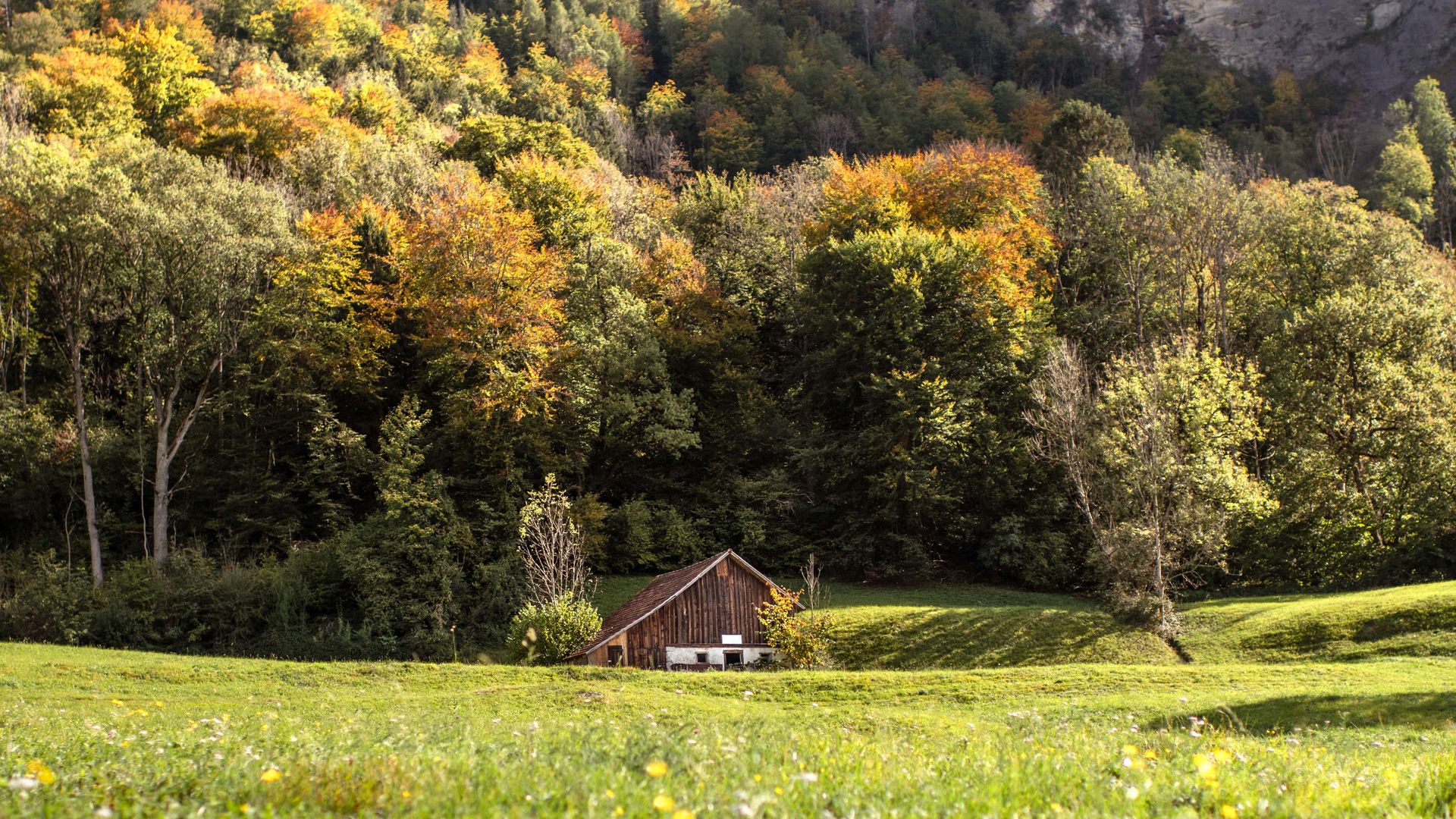 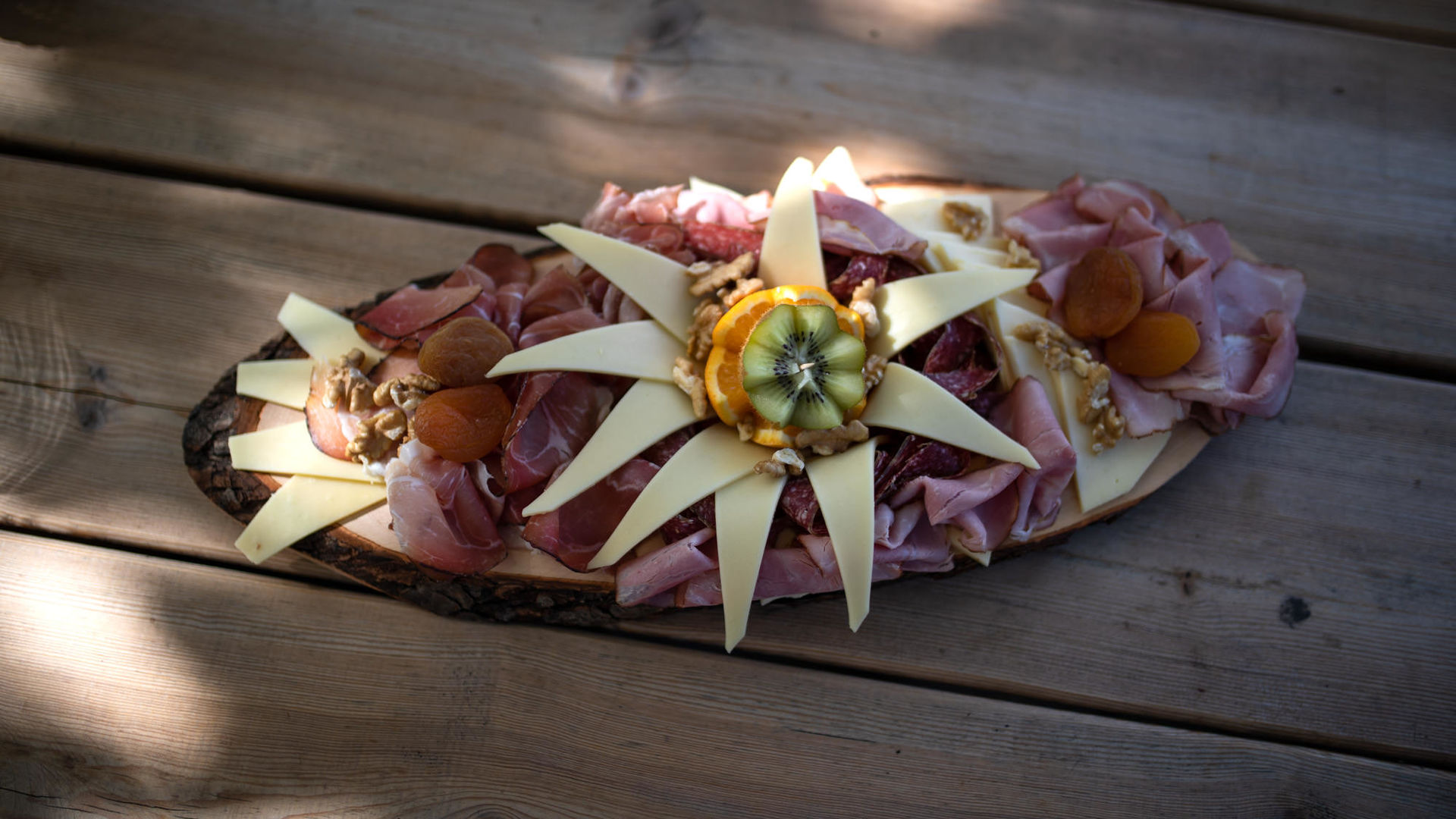 Triesenberg is my final destination on Day One but it is no easy stroll from Triesen. Over two hours of concentrated ascent, this section of the Liechtenstein Trail is also not one you would wish to hurry. The forests around the traditional hamlet of Böda are remote and romantic, although with typical Liechtenstein charm, even on these more isolated sections of the trail, there are benches to rest on and even a woodland fitness course with exercise apparatuses made out of logs. When I arrive at Triesenberg, a surprisingly busy small town for one that looks like the slopes on which it stands are too precipitous to be built on at all, I am gasping for breath and for a beer. I check into Hotel Kulm and get ready to experience Liechtenstein’s more traditional side: simple wood-panelled rooms and a restaurant serving classic, hearty Liechtenstein dishes with a bewitching view of flower-covered Alpine meadows tumbling to the Rhine far below. From here, I could see almost all the route I had walked so far on the Liechtenstein Trail. It is quite some way, but over three quarters of the hike still lies ahead… Luke is a novelist and travel writer based in Wales. From approximately the first moment he could hold (and chew the end of) a pen he imagined seeing the words he had written in books on bookshop shelves (ideally front-of-shop recommended reads stands) and in newspapers (ideally where the reader would be so entranced by the content they would forget they were on a packed train full of grim-faced commuters and be transported to a better and purer place). A four-time winner of the Bridport Prize in the short story category, his first foray into travel writing was on local newspapers the Western Gazette and then the Orkney Today, where he wrote on such blockbuster attractions as Somerset’s country gardens and seaweed-eating sheep on North Ronaldsay. On the non-fiction front, Luke writes books for travel publishers Lonely Planet, Rough Guides, Insight Guides and Avalon Travel Publishing, with his articles (mostly on Latin America, the Caribbean and the UK outdoors, on extreme adventure and on culinary travel) gracing the likes of the Telegraph, the Independent, the BBC, Which?, N by Norwegian, Morning Calm magazine, Adventure.com and Walk magazine