It is from Triesenberg also that you can make an exciting detour from the main Liechtenstein Trail, continuing by road to Gaflei then picking up a vertiginous Via Alpina on the country’s most famous trek, the Fürstensteig: the rocky route crests the 2000m contour and can be quite hair-raising in places, but the rewards are close-up views of some spectacular mountains, including the iconic Drei Schwestern (Three Sisters) peaks. The path links up again with the Liechtenstein Trail at Planken, but only opens in June due to snowfall.

My way today stays below the snowline, but everyone I have talked to thus far in Liechtenstein tells me this next section of the trail is one of the most beautiful and underrated of any of the nation’s hikes. And they are not wrong. Ascending to 1100 metres as the path now does may not seem too much in the Alps, but everything is relative: it is still higher than the highest summit in England or Wales. At Profatscheng, the loftiest point on the Liechtenstein Trail and one of the postcard views of the country on a clear day, the ethereal woods of Rotnabodnerwald drop away and on a shoulder of open grassland the mountain chains on both the Liechtenstein and Switzerland sides of the Rhine show themselves off. 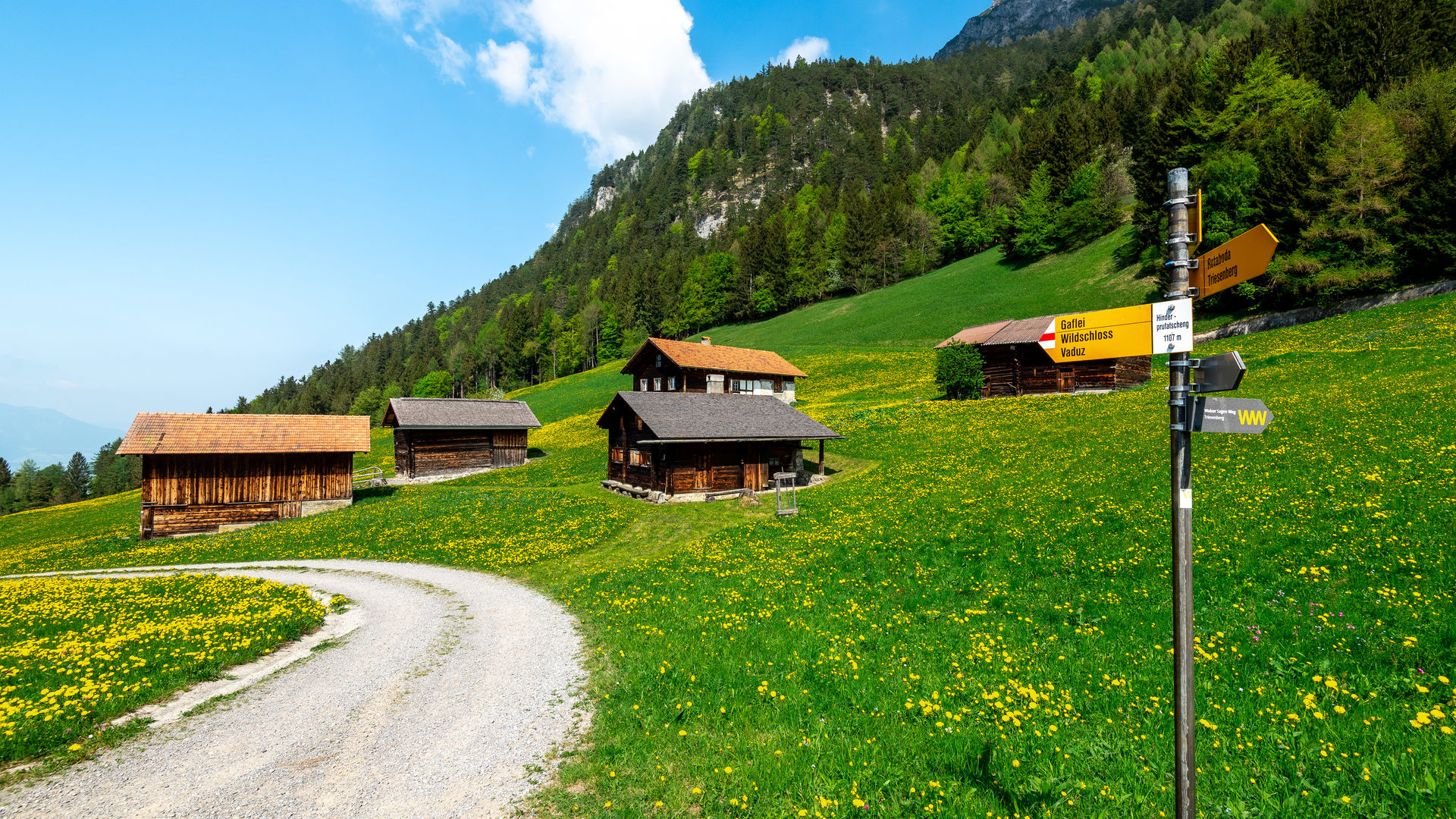 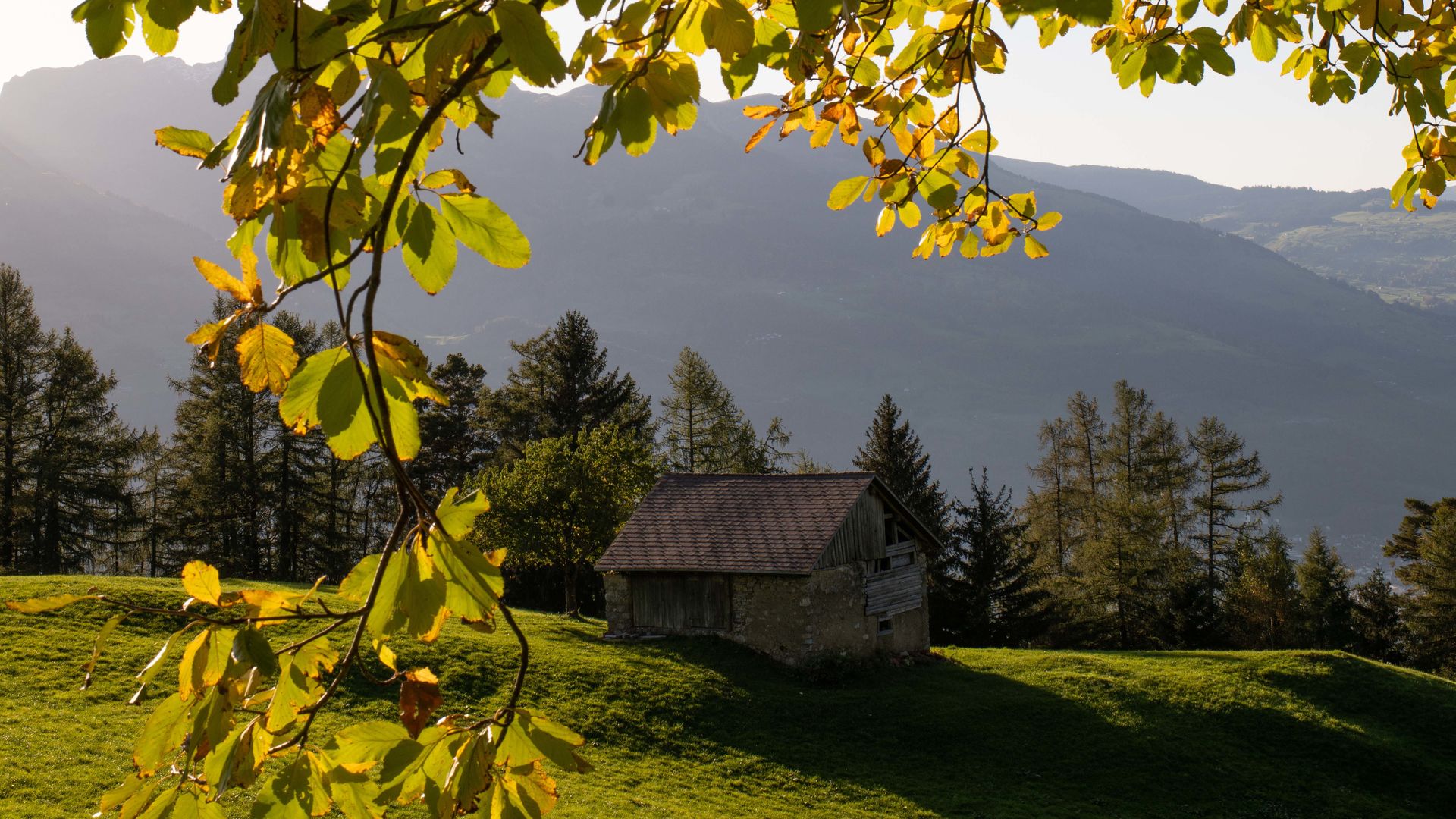 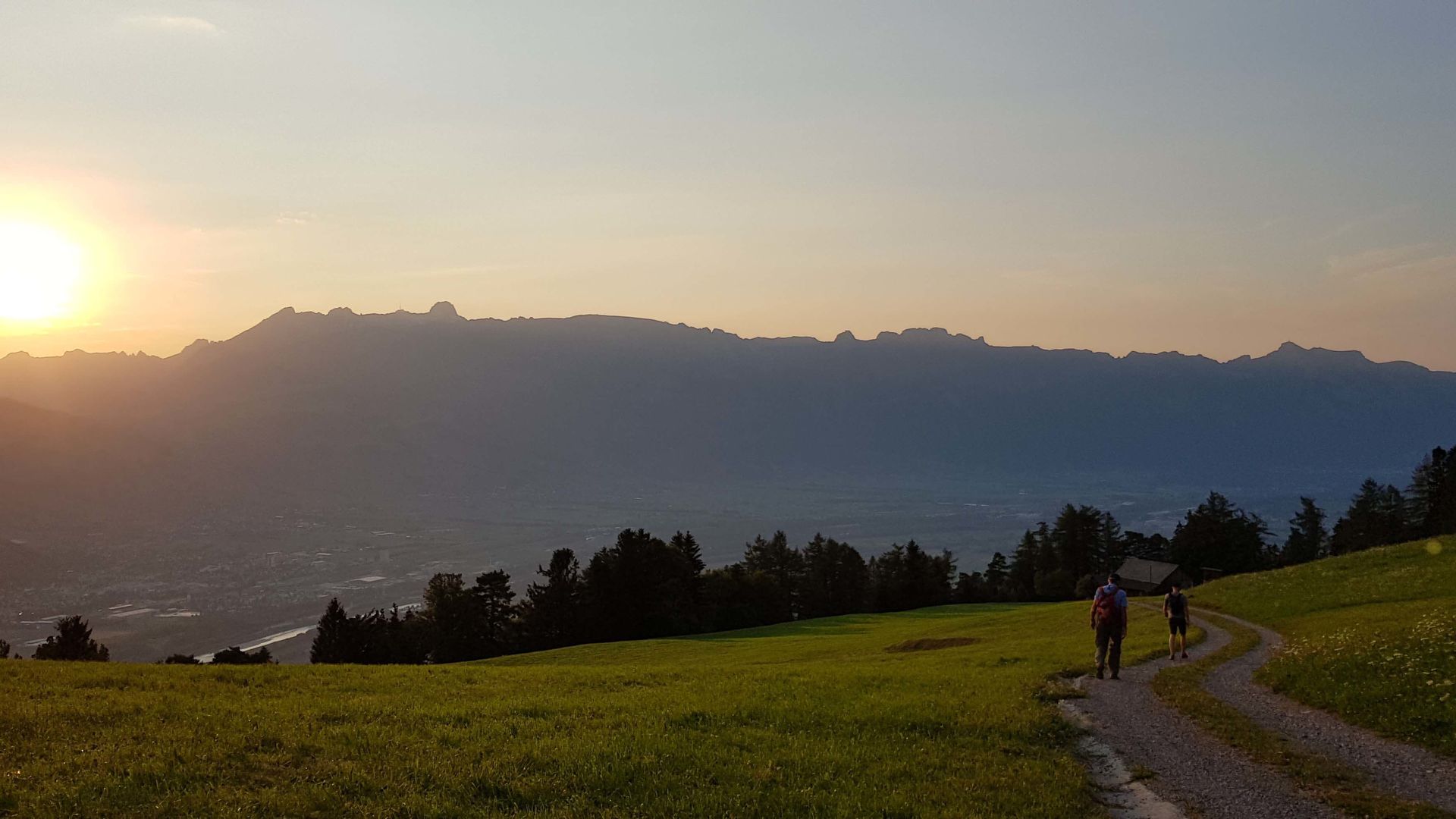 But the best bit is still ahead. Just down from here, the path zigzags steeply down through the next belt of forest, Schlosswald. About halfway down, emerging mysteriously through trees blanketed by wild garlic, is the appropriately named Wildschloss, or wild castle. This romantic ruin balancing precariously on a crag quickly became my favourite of Liechtenstein’s many castles, the more famous princely residence of Vaduz Castle included. Here again, the thoughtfulness of Liechtensteiners for the hikers that pass through their countryside is obvious: chunky benches have been constructed and litter bins provided to make the Wildschloss a truly fairy tale picnicking spot. Someone has even gone to the trouble to provide a selection of walking staffs to ease pressure on the knees during the downward run from here into Vaduz. What more can I do than sit here awhile, contemplating the view and munching on the sweets kindly provided by the Hotel Kulm?

«The thoughtfulness of Liechtensteiners for the hikers that pass through their countryside is obvious: chunky benches have been constructed and litter bins provided to make the Wildschloss a truly fairy tale picnicking spot.» 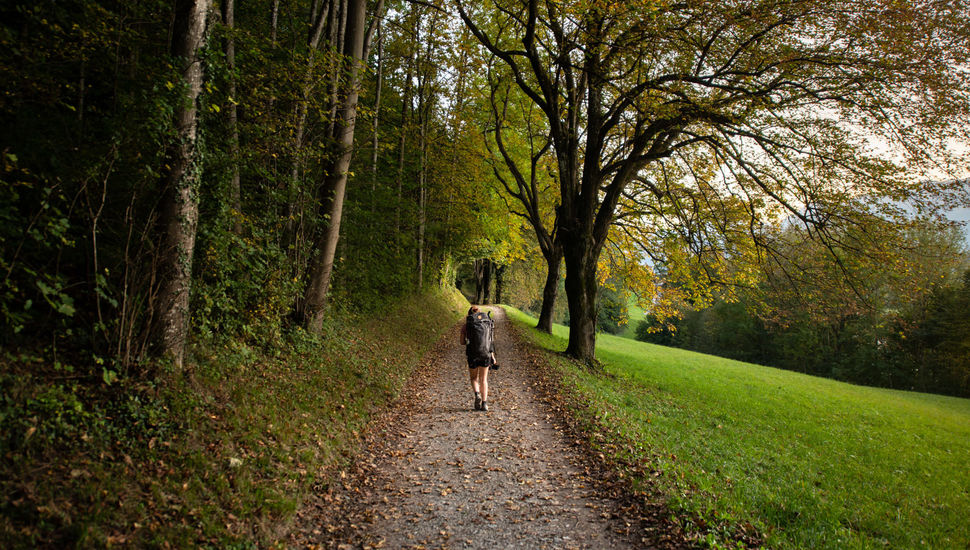 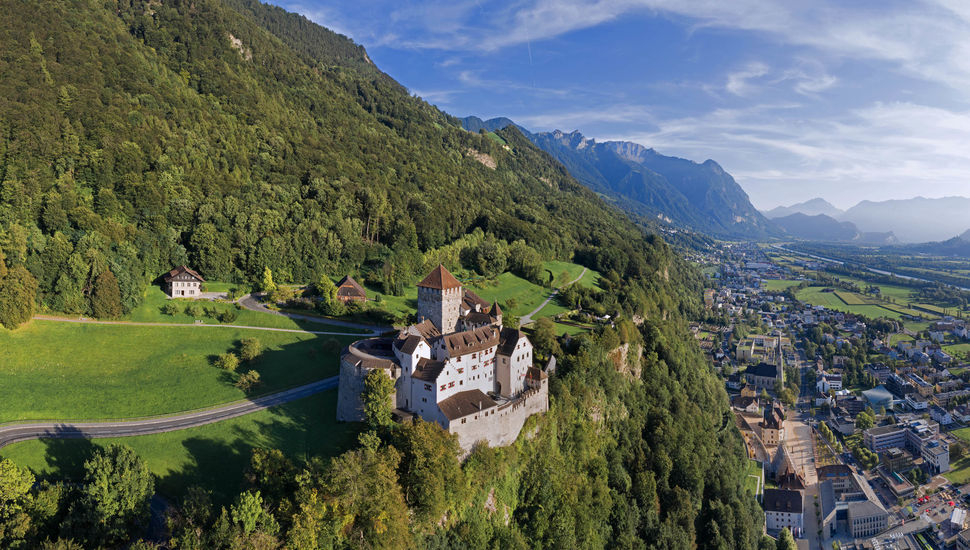 It is a rare thing these days to approach a European capital for the first time on foot: if you think of approaching Paris or London in such a way the idea seems farfetched, but it is not in Liechtenstein where everything is that much smaller, and so it is that I tramp into Vaduz. First I get just fleeting glimpses through the trees of this, Europe’s third-tiniest capital city. Slowly the rooftops increase in size and then the turrets of Vaduz Castle announce my arrival.

This fortress, dating from the 12th century, has been the official home of Liechtenstein’s Royal Family since 1938, and is consequently not open to the public. Once every year, on the country’s national day on 15th of August, the Prince Hans-Adam II does open his gardens and invites Liechtenstein residents inside for a tipple, but for now I have to content myself with the LIstory App’s clever virtual tour of the normally forbidden rooms of the Royal residence. Even LIstory cannot show me all the rooms, of which there are so many that apparently the Prince himself does not know the exact number! I descend into Vaduz centre. Quiet by most standards, it still seems bustling after the quietude of the trail. Right on the corner of the first street I see is a bistro, Brasserie Burg, ornately done up in Parisian 1920s style. High time, I feel, to sit with a beer on the terrace and appreciate this delightful dinky capital city without a backpack on. 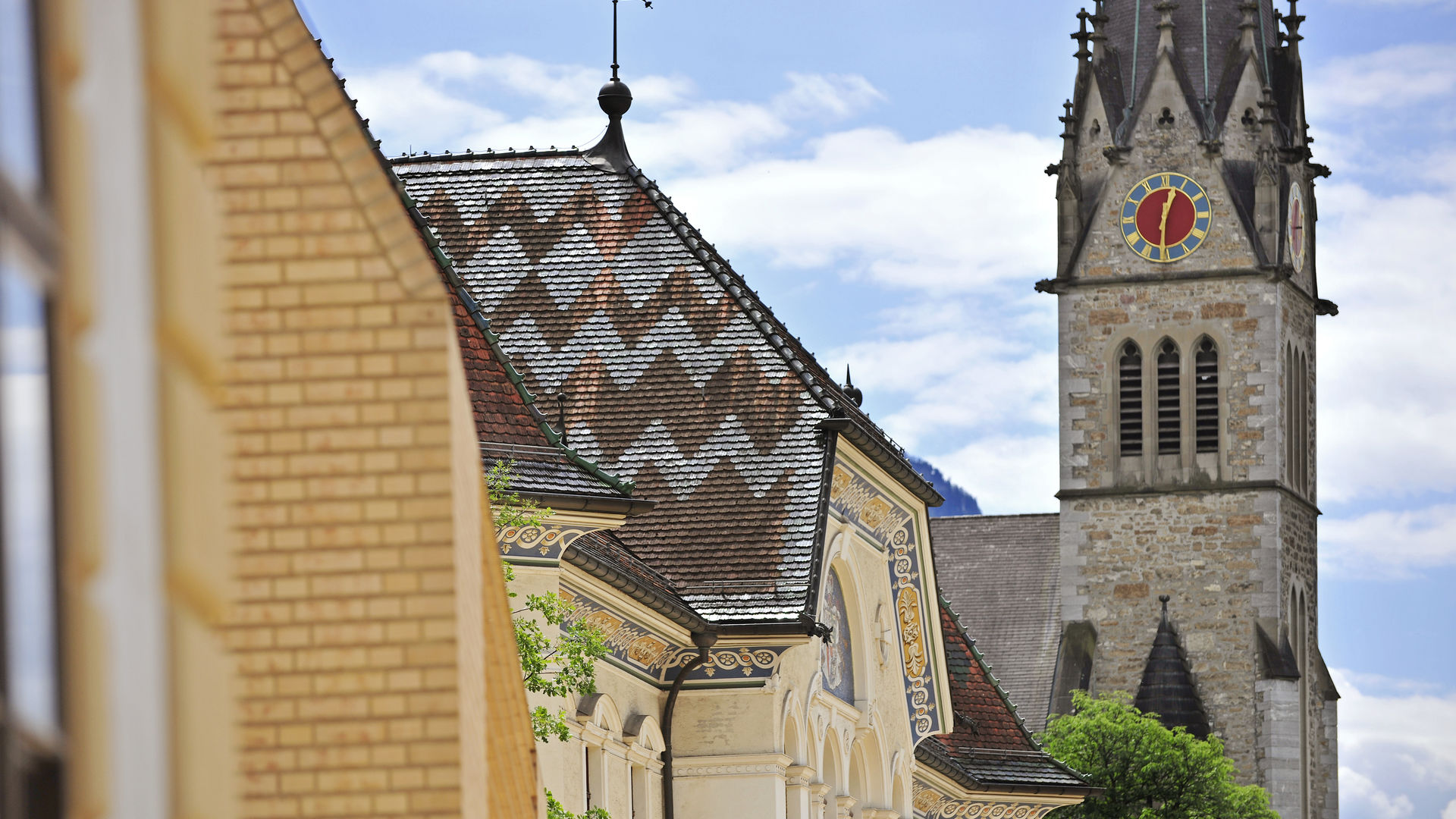 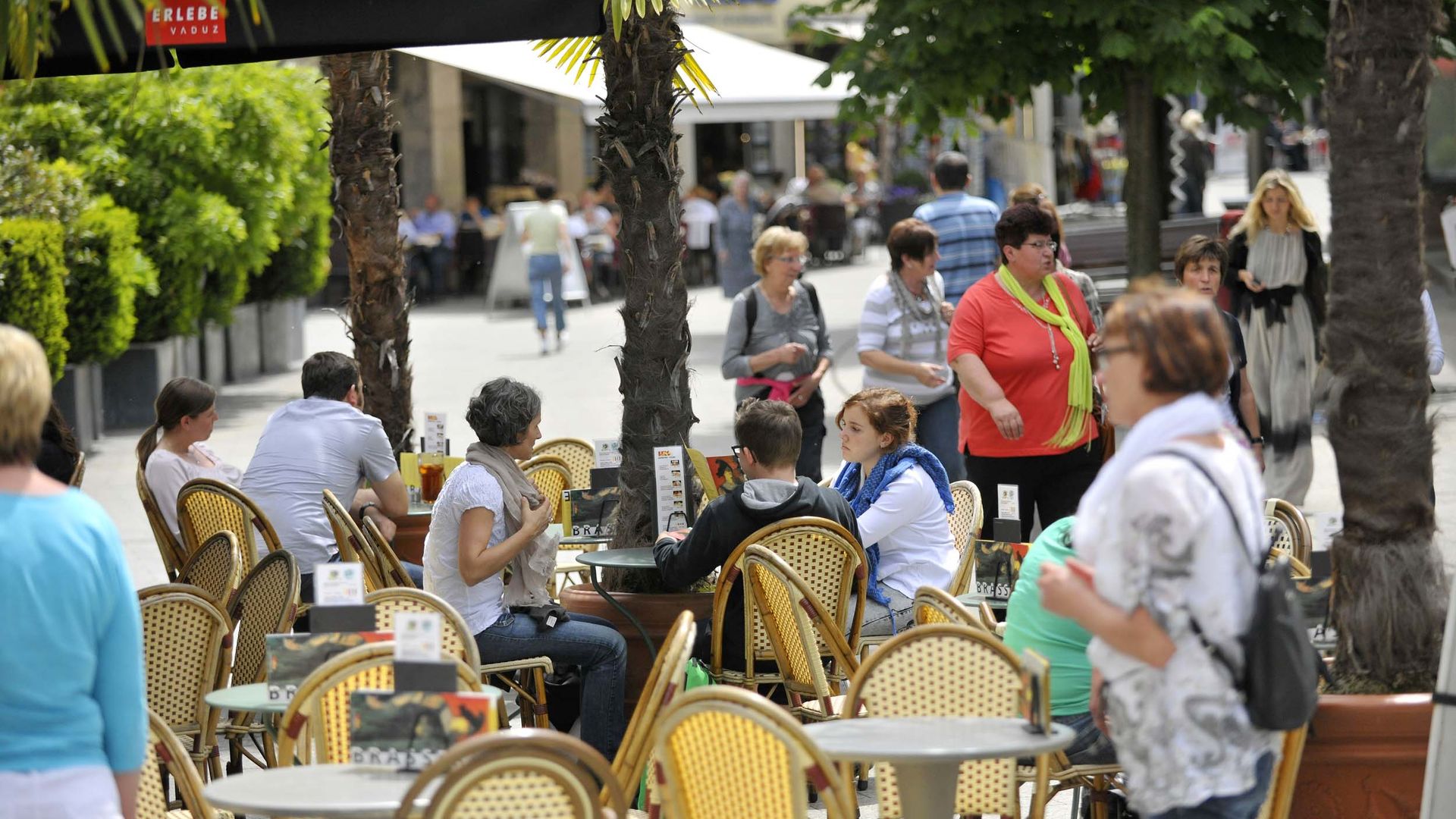 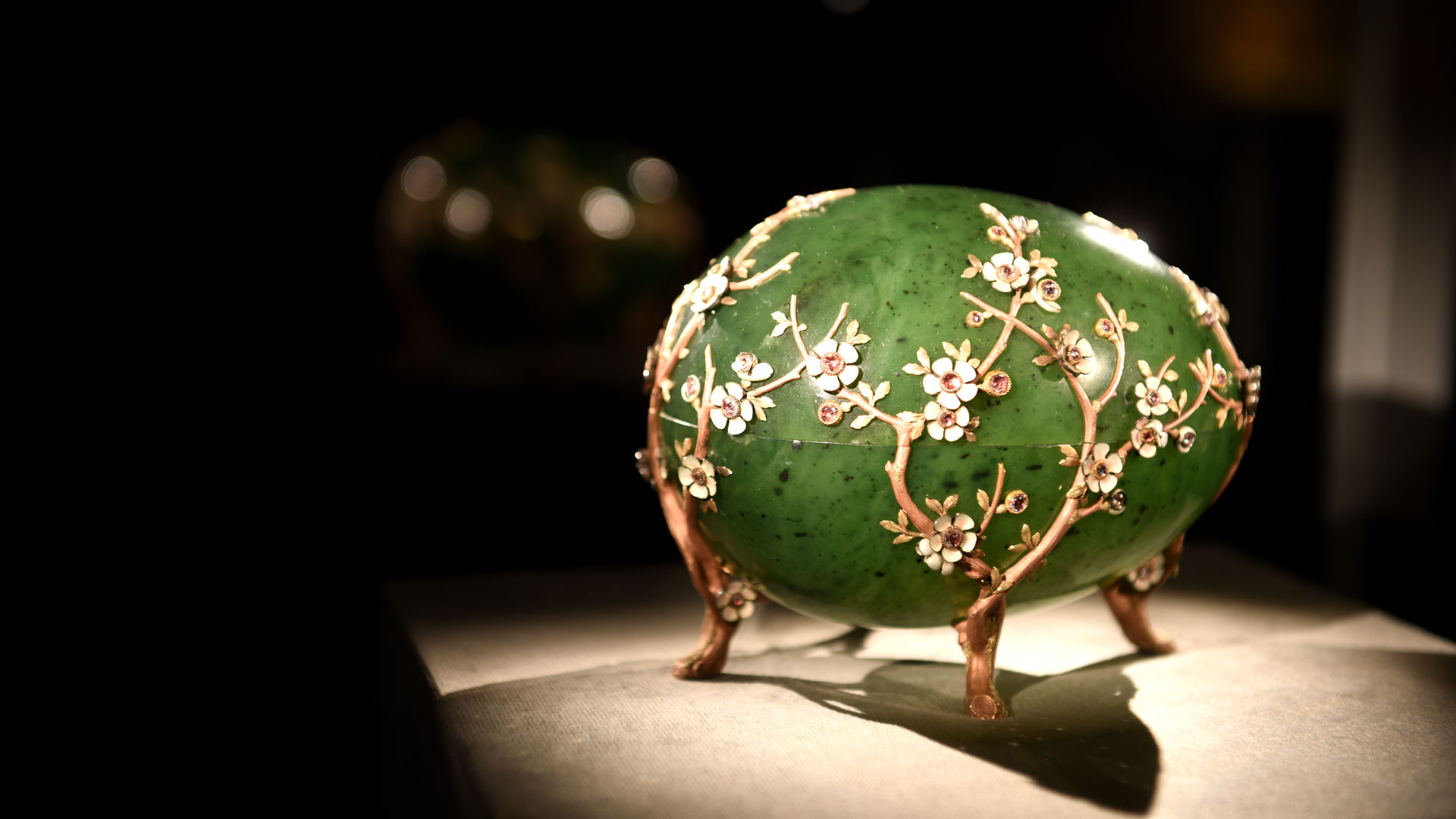 Luke is a novelist and travel writer based in Wales. From approximately the first moment he could hold (and chew the end of) a pen he imagined seeing the words he had written in books on bookshop shelves (ideally front-of-shop recommended reads stands) and in newspapers (ideally where the reader would be so entranced by the content they would forget they were on a packed train full of grim-faced commuters and be transported to a better and purer place). Eighteen months travelling overland across the Americas from Canada to Tierra del Fuego soon cultivated him a bit of a reputation as a lover of extreme adventure travel. Indeed, since 2008 he has been writing almost exclusively on wildernesses – with a particular obsession for the Amazon Basin and Andes mountains – and Wales, of course. Besides two novels, Roebuck (2015) and Song Castle (2018), Luke is the co-founder of off-the-beaten-track Wales adventure travel site Undiscovered Wales. He also writes books for travel publishers Lonely Planet, Rough Guides, Insight Guides and Avalon Travel Publishing, with his articles (mostly on the UK outdoors and Latin America, on extreme adventure and on culinary travel) gracing the likes of the Telegraph, the Independent, the BBC, National Geographic, Which?, N by Norwegian, Morning Calm magazine, Adventure.com and Walk magazine.